Nielsen Music has extended its relationship with SOCAN (Society of Composers, Authors and Music Publishers of Canada) to remain the exclusive provider of detailed radio airplay data from more than 500 Canadian stations.

As part of the deal, Nielsen has increased coverage by adding 200 new stations to its BDSradio metrics platform. The data analytics and measurement company says increased monitoring will provide deeper insight into Christian radio formats for the first time and include additional French-language stations in Canada.

“With coverage of more than 500 stations in Canada, BDSradio now provides airplay for the long tail, including Christian and French language stations, to help artists get paid,” said Paul Shaver, VP of Entertainment for Nielsen Music, in a news release. “We are honoured to continue our 12+ year relationship with SOCAN, one of the largest and most respected publisher rights organizations in Canada.  Renewing our partnership with SOCAN demonstrates the power of Nielsen Music as the trusted and reliable data source for the music industry.”

Fill out this form and we’ll follow-up with you personally. 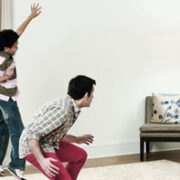 Industry publications love predicting the decline of the living room screen. Sure network television channels suffer from declining viewership, but the living room flat panel has never been more popular with audiences and, especially, advertisers. Even despite the proliferation of a myriad of media content playing devices.

Since the arrival of television sixty years ago, the networks have controlled the living room set and enjoyed a monopoly over the advertising shown on it. However, things are changing fast.

When an advertiser buys airtime on a television network, the sole way to measure the effectiveness of the campaign is to rely on Nielsen ratings.

Nielsen ratings are based on a representative sample that is composed of just 25,000 homes (5,000 for national programming and 20,000 for local stations). Collectively they reflect the viewing habits of over 106 million U.S. households in 210 markets. Because TV ratings are based on samples, it’s possible for shows to get a 0.0 rating, despite having an audience (Example: CNBC’s talk show McEnroe). No matter how the sample is selected and how the habits are representative of the population, sample based ratings always are approximations.

Combine these statistical imperfections with the availability of more choices in the living room, and no wonder network is struggling.

Meanwhile bleeding edge content companies and ad agencies are utilizing the same techniques that have made web advertising a force with which to be reckoned to take over advertising on living room screens.

These content providers have leveraged the smart screen to become an advertising platform that can better target demos and deliver a more reliable set of analytics when it comes to measuring success.

For instance, there are over 27 million Xbox Live subscribers who provided a wide array of information when signing up for the service (name, age, location, etc.). By using their Xbox, and services attached to it, they are constantly providing more data regarding their interests, spending habits, etc.

The way ad placement is sold on screen is not by length of airtime, but per impression, the same way ads are sold online. In the same way that BBC Kids Television can accurately target moms aged 25-54 on Facebook, Nike can target men 25-35 interested in soccer on Xbox Live.

And they have done it! In June 2012, when the NHL Stanley Cup and the UEFA Euro 2012 were overlapping, Nike maximized the efficiency of its ad budget by directly targeting potential customers using Xbox Live. Soccer fans only saw ads relevant to them, and hockey fans weren’t bothered by soccer ads.

In March 2012, The LA Times reported that the amount of time Xbox Live subscribers spent streaming media surpassed the amount of time playing games. Furthermore, Xbox Live media streaming usage was growing 30% yearly, with users spending 84 hours per month connected to the system. This has grown very quickly and now represents more than half the 150 monthly hours the average American family spends watching television networks (according to Nielsen).

Penny Arcade reported that, according to Microsoft, a single ad placement on its console dashboard receives an average 9 million impressions on a weekday and over 15 million on a weekend. Furthermore, their advertising business has grown 142% yearly since 2010.

Lessons for the Networks

Some of the most forward thinking television companies are beginning to see that in order to compete they have to change their ways of targeting and selling advertising.

Tivo’s recent purchase of TRA, a research company that has found success in recent years with a system that matches up television viewing with consumer buying habits, is a clear indication of where things are moving: increasing ad effectiveness.

The influence of set-top boxes is helping to shape the new business model. Marketing directly to the audience and the harnessing the way in which consumers interact with their televisions is a top priority for agencies and content producers.

Contemplate the opportunity for a moment. Netflix claims that its subscribers viewed over a billion hours of content in the month of June. HBO GO, the streaming video-on-demand app, has achieved success so overwhelming that the premium network is considering offering a streaming only subscription.

Bottom line? The living room screen is new again. It presents a whole new opportunity to connect directly with individuals within the context of the content they choose at the moment they want it with an engagement or offer that’s unique to them. That’s revolutionary.

The living room screen is not only alive and well… it’s where the action is!

Enter your name and email address below.

The day after the crowdfounded Ouya hit retail; the console’s launch could be considered a commercial success. Sold out at Gamestop and on Amazon in many countries, yet some shipping issues regarding the Kickstarter units could jeopardize Ouya’s future.

Many early brand advocates have questioned Ouya’s apology about shipping their product:

– why did retailers get their units prior to early kickstart backers?
– why Ouya’s team has only acknowledge a breakdown with their shipping partner on the day the console hit retailers’ shelves?

If there is one important marketing lesson we can learn from Ouya’s troubled launch it is that catering to your brand advocates is key to growing a community, and that openess and honesty trumps opaque communication.

Is Ouya’s communication going to be its downfall? How many units did Gamestop and Amazon have in stock? Is the “sold out” status of the console another marketing ploy?[/infobox]

Hold on one minute – what is, who is OUYA?

OUYA (@PlayOUYA) is “A New Kind of Video Game Console” – an example of disruption at its finest.

From an unknown name a few weeks ago, OUYA has written the blueprint for what can only be describe to as “viral community branding.” If you do not recognize the name, you’re not alone – OUYA has just had the most successful launch in Kickstarter history by raising over a million dollars in less than 8 hours! Since the fundraising program was unveiled and launched they’ve been trending worldwide on Twitter, have been one of the most searched terms on Google and Bing and the subject of countless articles.

What they accomplished in less than 24 hours is phenomenal. They have now raised more than 5 million dollars in just a few short days.

So what’s the secret behind such a monumental marketing success? There are a lot of factors to consider but all of them have one thing in common: Community.

Harnessing the power of Community has been done before but rarely with such successful execution. There are a lot of steps that have been taken to make sure the brand would be successful. When dissecting the brand identity of OUYA it’s clear that their marketing message is crafted to cater to their audience: gamers. The product is indeed filling a void in the gaming industry, yet what made the branding so efficient is the way OUYA positioned itself as a console for gamers that couldn’t exist without their support.

The people behind OUYA are all “rock-star” veterans of the gaming industry. Julie Uhrman is a former digital distribution VP for IGN (a Newscorp owned company). Ed Fries is one of the fathers of the original Microsoft Xbox. Muffi Chadali is responsible for the Amazon Kindle. And designer extraordinaire Yves Behar is considered to be the heir apparent to Philippe Stark.

By using an effective marketing message and harnessing the right channels to talk to their audience, OUYA’s strategy and message was strong from the outset. They also connected with legendary game designers who had recently experienced overwhelmingly successful Kickstarter campaigns. This gave their product “street” credibility by using expressions like “open source”, “hackable,” and “free to play” which implies positive connotations within the gaming community. This turned community influencers into an active component of development. Crowd funding completed the equation.

What can’t be overlooked is the low entry price point of the device. This is a tremendous advantage, but to achieve the exposure OUYA needed and ultimately received it was imperative to appeal to the consumers and the most vocal influencers in the gaming community. The result was like an out-of-control wildfire that spread quickly.

These are smart and experienced people and this was a well thought out plan that likely produced results better than originally anticipated. It should be noted that this technique of branding is not normally utilized to be self-sustainable. It would be naive to think that the all-star industry veteran team behind OUYA is solely relying on the community for developing its offering.

OUYA was most likely just gauging consumer/developer interest, and had Angel or VC Investors waiting to see how well the Kickstarter campaign did before buying in with a more substantial and ultimately dilutive amount. A good influencer/community based campaign can make a brand and therefore the difference between the terms of the deal, or whether it goes through at all.

There’s no guarantee that OUYA will be a success but they’ve completed a critical phase quickly, establishing their brand, and creating a huge buzz in a very specific community. That alone is an impressive feat. By knowing their audience, they were able to cater to it directly, engage community influencers, listen to their needs, and turn potential consumers into community advocates by giving them a crucial role in the product lifecycle.

Quite simply – “The people have spoken. And they want their Ouya”. – Venture Beat

[notice]If you enjoyed this article you may also want to read: The Rebirth Of The Living Room Screen – Click Here >[/notice]

Want To Know More About Inbound?

Enter your name and email address below.